Looking to visit Nepal? Here are some 20 Best Places to Visit in Nepal.

Nepal is located in southern Asia, bordering china’s Tibet to the north, surrounded by India in the east, west, and south. Nepal is a magnificent, beautiful culturally diverse country that is considered to be the most beautiful destination for its diverse offering of some amazing tourist spots which attract visitors for many reasons. Each place offers unique ways to enjoy your holiday and make a visit to the country an unforgettable experience for a lifetime. There are so many amazing places to visit in Nepal beyond just its mountains and landscapes.

Take a look of 20 Best Places to Visit in Nepal

Kathmandu is the capital city of Nepal. Nepal’s capital is surrounded by a valley full of historic sites, ancient temples, fascinating villages, and shrines. This capital city is Nepal’s political, business, and cultural hotspot, bringing Nepalese from all religions together. This city is known for its ancient architecture and is dotted with many temples, monasteries, and temples. Kathmandu is also known as the city of temples. Some other major attractions here included Pashupatinath temple, Boudhanath stupa, and the royal palace Hanuman Dhoka. For several hundred years, this city was one of the three rival royal cities along with Bhaktapur and Patan. The highlight of Kathmandu has long been Durbar Square a UNESCO World Heritage Site. Different faith, Monuments, and temple of different styles, sizes, and shapes can be found here.

The top things Kathmandu famous for

is one of the largest Buddhist stupas in the world which keeps an eye out in every direction. Stupa has stood as a beacon of Buddhist belief for hundreds of years, where you can see towering over the town as a big mandala of beauty and peace and also big eyes. The stupa itself is a symbol of enlightenment. Each shape represents the five elements which are sphere, water, fire, air, and earth, they are also the attribute of the five Buddhas. Boudhanath stupa is also listed as UNESCO World Heritage Site.

Bhaktpur or Bhaktpur durbar square is an elegant and open space facing south surrounded by building from the 13th century to the 18th century.

Bhaktpur is the third of the “Royal Cities”, and lies on the trade route between Tibet and Kathmandu. Primarily Hindus live in Bhaktpur. Bhaktapur is also listed as UNESCO World Heritage Site. The famous temple of Bhaktapur is NYATAPOLA, BHIRAVNATH, and DATTAREYA. Bhaktapur is rich in ancient arts, religious values, cultural tradition, ancient sculptures, and architectural masterpieces and also known as an open museum. Bhaktapur is also famous as the city of gods and goddesses.

The top things Bhaktapur famous for

Pokhara, the “Tourist Capital of Nepal” is a clam magnificent beauty that has been subjecting of inspiration for many travel writers and travellers. Its natural climate, air, breathtaking drops of snowy peaks, lakes, and greenery surrounded makes it a special destination with remarkable natural composition. This laidback touristy lakeside town offers magnificent views of the Annapurna range. Pokhara is a launching pad for many treks and adventure sports like mountain biking, rafting, and paragliding.

The top things Pokhara famous for

Langtang valley is a Himalayan valley in the mountains of north-central Nepal. Langtang is best for its excellent valley trek and is also known as the third most popular trek in Nepal. This valley has been a long favourite trek due to its magnificent view, interesting Tamang culture, and relatively easy access place from Kathmandu. This trip is considered one of the best and shortest trips in Nepal. Several treks can go through the Langtang valley and link it to the different villages inside the Rasuwa district. The valley lies within the Lantang national park, which borders Tibet and china.

The top things Langtang famous for

Nagarkot is located close to Bhaktapur and is the perfect place to visit and relax with and breathtaking view of the stunning 8 Himalayan range along the view of sunrise and sunsets. Nagarkot is such a mesmerizing destination that every generation must prefer to visit. Nagarkot lies 32km away from the Kathmandu valley. In Nagarkot, we can also go trekking, and do adventure sports including paragliding and mountain biking.

The top things Nagarkot famous for

Lumbini, the birthplace of lord Gautam Buddha. Lumbini is one of the holiest places of one of the world’s great religions and a popular Buddhist pilgrimage site. It is the place where queen Mahamayadevi gave birth to Siddhartha Gautama around 566 BCE. Lumbini is a village, holy site, and place of pilgrimage honoured as the birthplace of Siddhartha Gautam Buddha. This place lies in southern Nepal. In this place, you can see all the vehicles and statues of the Buddha dharma coming together. Lumbini is also listed as UNESCO World Heritage Site.

The top things Lumbini famous for

Chitwan National is the first National park of Nepal. It was established in 1973 and was granted UNESCO World Heritage Site. This place is located in the subtropical Inner Terai lowlands of south-central Nepal in the district of Nawalpur, Parsa, Chitwan, and Makwanpur. Chitwan National Park is home to grassland, marshes, forest, and wildlife conservation including elephants, one-horned rhinos, 500+ species of birds., sloth bear, leopards, and the majestic Royal Bengal tiger. It is one of the best places to visit in Nepal if you’re looking to experience Wildlife.

The top things Chitwan famous for

Ilam is a city in eastern Nepal, which is one of four urban municipalities of the Ilam district. Ilam is a town and a tourist destination district of Nepal. If you’re a tea lover, you have to visit Nepal’s tea district Ilam. There are some beautiful tea gardens overlooking this scenic and quaint town that is still relatively untouched by the traveller and quite off-the-beaten-track. There is one famous place called kanyam inside the Ilam district which is the pocket zone of Himalayan tea which is exported overseas. Kanyam is a famous tourist destination for both national and international travellers.

The top things Ilam famous for

3. Chocolate made from milk

The Annapurna region is one of the most popular trekking regions in Nepal with options that range from a few days to a few weeks. The Annapurna circuit is a trek within the mountain ranges of central Nepal. The total range of the route varies from 160-230 km, depending on where motor transportation is used and where the trek is ended. This trekking crosses the two different river valleys and encircles the Annapurna massif. Trek through the village and then climb through the forest into Annapurna, a valley surrounded by high Himalayan mountains.

The top things Annapurna famous for

11. Everest and trek to base camp

The Himalayas attracts lots of people every year. Some of them want to go get to the mountaintop of Everest to prove to themselves they can beat the difficulties of lack of oxygen and high altitude. The summit of Mount Everest, the highest mountain on earth reaches 8,848 high. Everest is more than a mountain and the journey to its base camp is more than just a trek. Along a route dubbed by someone as “the step to heaven”. Trekking of Everest base camp is for many a lifetime experience and is not a very difficult task over 5550-meter sea level.

The top things Swayambhunath famous for

Bardiya National Park is the largest national park in the lowland Terai. This park is a protected area in Nepal that was established in 1998 as Royal Bardiya National Park. Bardiya national park is one of Nepal’s best-kept secrets. It is the largest wildlife conservation park protecting 968 km square of sal forest riverine forest, grassland, and Savannah. It is bordered by the Karnali River and bisected by the Babai river in the Bardiya district. It is not overrun by tourists and there are excellent opportunities to spot endangered species of wildlife and birds. The Royal Bengal tiger is considered the king of Bardiya National Park.

Pashupati is one of the holiest Hindu Shrines in Nepal. This temple is a Hindu temple, dedicated to lord shiva, and is located in Kathmandu Nepal. This Temple is also listed as UNESCO World Heritage Site in 1997. Pashupati Temple is stretched across both the bank of the beautiful and sacred Bagmati river on the eastern fringes of the capital city of Kathmandu. Pashupati is regarded as the biggest Hindu temple in Nepal and the temple has so much to offer. Every year thousands of pilgrims visit this temple to worship. Many older adults visit there and spent a few weeks. People here believe that if they die in Pashupati Temple they will be reborn as humans regardless of their sins. Moreover, the astrologers of this temple predict the exact death day.

International Mountain Museum is located in the beautiful mountain range town of Pokhara, It showcases indigenous habits of the mountain regions of Nepal and the world. The main attraction provided by International Mountain Museum is a great overview of mountaineering across several countries, not just Nepal. In this Museum indigenous groups and cultures are preserved and explained very well. This museum is considered a great place for learning and adopting knowledge about history.

Janakpur, Janaki Mandir, or janakpur Dham is a religious place located in the Terai region of Nepal and founded in the early 18th century. Janakpur is a city believed to be the birthplace of Goddess Sita and the place of her marriage. This city is also called a city of ponds, More than seventy ponds can be found. In this place, you can learn more about ancient and revered Hindu epics. Janakpur is also the headquarter of the Dhanusha district and the capital of Madesh Province.

The top things Janakpur famous for

Dharan is a city in the sunsari district of eastern Nepal. Dharan is a replica of Indian culture and tradition. Dharan is considered the gateway of the Mahabharat hills and one of the biggest pilgrimage locations in Nepal. Tourists mainly visit this city for its natural beauty as well as take part in extra curriculum like golf, hiking to Namche, Bhedatar hill station, picnicking at Raja rani lake, etc. There are a few historical and religious places to visit in this city, they are Buddhasubba Temple, Vijaypur Hill station, Pindeshwor Temple, Panchyakanya Temple, and Shiva Jatta. Dharan is also known as “Fashion City” for commonly held most youth and interest towards fashion.

The Helambu region is a popular area, particularly with trekking companies offering the area. Helambu trek starts from Sundari Jal which has a small dam hydroelectric station. This is a relatively low-altitude trek along a less busy trekking route through temperature forests, green valleys, and rhododendron forests. This trekking can be a very ideal destination for trekkers who have a short time but want to observe the Lantang Himalayan range. This trek is quite easy compared to other treks. The stunning view of the Himalayas, alpine forest, and friendly Tamang people make trekkers very satisfy doing this trek.

Chitlang village in Nepal was dominated by Newars during ancient times. Chitlang is a new destination near the valley, 22km in the southwest direction. Chitlang is rich in cultural heritage and natural beauty. This village is an organic village in the way of living life in organic style located in the Thaha municipality of Makwanpur district. Famous as the gateway of motors cars carried on the back of people. Chitlang offers one of the best hiking/trekking around Kathmandu.

Tripset Tours is the Best Travel agency in Nepal. If you want to visit any of the places of this, Contact us to get the best package Rates. 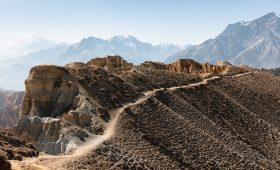 Naturally Nepal Once Is Not Enough!!! Types and Components of Travel And Tourism

This site uses Akismet to reduce spam. Learn how your comment data is processed.

No comments to show.